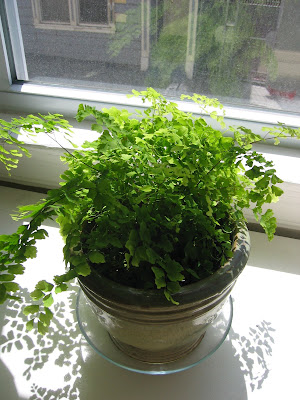 So I was on vacation recently – away from the blog – and when I got back all my editors suddenly wanted drafts. The first breaths of the brisk winds of fall, I suppose. In any case I’ve been doing a lot of writing these days – for which I’m actually paid (rather than the prospective research and navel gazing that feeds this project). So spending a lot of time writing hurts the blog… but it does wonders for the plants that sit in the window to my right – just past the mouse. When I’m sitting there trying to force my brain to figure out a way to make a particularly improbable transition – or how to breath some narrative life in to a sterile series of facts – it sometimes plays tricks on me to get out of the chore. One of my brain’s favorite tricks is the classic “OMG what’s that!” caper. It usually plays out something like this:

Okay, I wonder if it would work to have a short establishing sentence that shows how this next thing is connected to the argument. But that’s boring – so maybe a dependent clause to say why it’s actually exciting. But now it’s a long sentence. Okay, so – GOOD GOD WHEN IS THE LAST TIME YOU WATERED THE FERN?!

Therefore – lots of writing = lots of attention for plants. What’s fascinating to me is that attention = healthier plants. If you think about it, it doesn’t make a lot of sense that my ministrations should be helpful. I know nothing about the inner life of a fern. I’ve watered it too much and too little without knowing the difference. I’ve attacked it with scissors when I found it aesthetically displeasing, I once reduced it to two pathetic fronds. I’ve haphazardly introduced foreign species into its pot. I’ve dumped it out and torn up its roots. Doesn’t it seem like it would be better off if I just let it do it’s thing?

I make crazy hypotheses about my plant’s preferences and test them out and – over time – I think I’m actually figuring some stuff out. What follows is the Fern Saga: Fernando was a housewarming gift from a dear friend (Emily) about two years ago. I immediately formed several theories on the care and feeding of our new roommate.

1. Fernando did not like direct light
2. Fernando needed a bigger pot
3. Fernando hated movement and was not, under any circumstances to be jostled or (heaven forbid) carried to the sink for water.

Beth (the wife) chaffed under the imposition of my crackpot rules, but she doesn’t seem to have much patience for plants, so she let me do what I wanted. With the possible exception of #2 these axioms turned out to be totally false. And as months went by Fernando go browner and browner. I experimented with different levels of moisture and heat. Then I noticed that I could lift all the soil out of the pot – suspended in a mesh of roots. I decided that the root-shoot-ratio had gotten out of hand – something was wrong with my care, causing Fernando to stop sending up new shoots and allowing the existing greenery to brown. So I waded in with the scissors and pruned him back to a few feeble fronds. Beth was aghast.
“Should we just throw it out?” she said.
“No – and don’t touch! What have I told you about moving it?”
“Yeah, you can really see that sitting still has done wonders for this plant.”
“Watch and learn,” I said.
And indeed, new green shoots started coming up. It was oh so gratifying to see those tiny fiddleheads. Even Beth regained some hope.
“Maybe we should give it some plant food,” she offered
“Schweigen.” I retorted. “In this house ve adjust one variable at a time.”
But the fronds that unfolded were pretty anemic. After a couple months I decided that I’d been on to something with the root-shoot-thing but I’d been going about it all wrong. The roots were overdeveloped and siphoning off all the energy from the leaves. So I pulled up Fernando and brutally tore his roots apart with my bare hands (actually I work gloves). Then I got a new pot, filled it with new earth (and worms as it turns out) and set him by my desk (in the sun btw). At this point Beth was really convinced that he was dead. It looked like I’d jumped up and down on Fernando, then taken a blowtorch to the leaves. Everything died. Then the shoots emerged again. Over the months Fernando slowly started looking – not vibrant – but at least viable. So what if the grasses that sprouted in the bowl were way taller than him. I noticed that the soil surface became covered with worm castings and I started working on a new theory – maybe the worms and bacteria in the soil were processing chemicals and giving Fernando more fuel to grow? What if he’d developed all those roots in the first place if he was starved for nutrients and needed to send exploratory tendrils to even the most barren of molecules? I walked across the street and bought some Miracle Grow from the hardware store. I got Miracid (for acid loving plants because it said it was for ferns and orchids). I took a look before I mixed it up – 30% Nitrogen, 10% Phosphorous, 10% Potassium – some trace minerals (the other 50% must be inactive ingredients – on inaccessible molecules). I poured it on and – boom! It was like someone had hit the gas under the pot, tons of new fronds sprang up and the whole plant got bigger and lusher. A month later I gave Fernando a little more fertilizer and again – it was like I was pumping him up with compressed air.

The moral of this story is that attention makes plants thrive (if they survive the initial missteps). I mean – skeptics might say that the moral should be that chemical fertilizer rocks – and yes they have a point, but I honestly don’t think Fernando would be this healthy and happy if I was just going through the rote process of watering once a week and once month with plant food. I know that I wouldn’t be as happy.

One thought on “Blog neglected, but plants thriving”