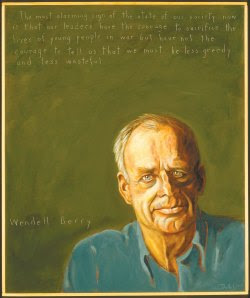 I’m reading Wendell Barry’s “The Unsettling of America.” He writes: “The modern mind longs for the future as the medieval mind longed for Heaven.” These are the sort of profundities that he’s able to jot off (with ostensible ease) that stop me in my tracks. This one especially because it hits close to home. I don’t really believe in Heaven, but I do have a deeply ingrained belief that the future is a better place, that we are constantly making progress, moving forward, making the world a better place. But by what metric do you measure improvement? The number of people living in poverty has grown. Large portions of the earth have become much less hospitable for human living. We have just closed the door on a millennium red from tip to toe with genocide. We all can tick off the improvements:

vaccines and antibiotics, cheap transportation, effortless global communication, huge gains in food production, and various creature comforts that certainly make my life better (This American Life podcast, the glory of hot water). But are we really happier?
Berry makes the case that people are inclined to control things – to put farms indoors where variables like sunshine and plant/insect interaction can be pinned down. But at the end of this road the individual is left with little under his control – these days we have not much control over what food we eat (the supermarket determines the selection and nutritionists choose what goes in each product), who sells us our gasoline, our electricity. We can choose between five mobile phone companies that offer suspiciously similar plans. Ditto for health insurance. We have no control over the means of production – we are at the mercy of doctors, mechanics, garbagemen, lumberers, Chinese assembly-line workers. There are a lot of people (Matthew Crawford, Kelly Lambert) who have cataloged the things we lose when we give up responsibility for these tasks to machines and outsourced labor. The average middle-class American is not left with much to call his own when the big decisions are the domain of experts and small decisions (like how thick to cut the carrots) are made be machines and foreign labor. It’s no wonder Americans are so in love with conspiracy fantasies: only the lone wolf who sees the truth that everyone else has missed can hope to rise to the level of the experts, that’s the surest path for a normal person to be able to make a difference in this world that seems so resistant to change, that’s a sure way to seize back some control. Perhaps that’s the root of the Birther/Truther psychosis. I can kind of understand it when I think of it that way ie how can all those mainstream-media experts be right where the feeling that something is deeply wrong in the world? Their assurances that everything is all right when something seems so deeply wrong only serves to strengthen the case for conspiracy.
Whew, long winding, awfully earnest post here. I’m neither a conspiracy theorist re: Obama or 9/11 please note. But I think I’m beginning to understand where they are coming from.