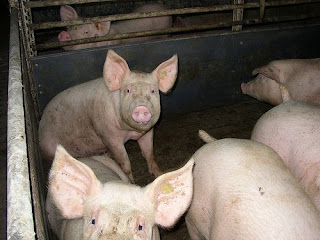 Photo/Compassion in World Farming
This Thanksgiving pause for a moment to give thanks not just for the food but to the brave men and women who produced it. They risk life and limb to put that turkey or ham on your table. Case in point, the other day I got my regular Nutrient Management newsletter via email. (A couple of years ago I wrote a long story about the state of hog farming in America and I still get updates from the trade magazines). I don’t always read these but this one was entitled, “Avoid Manure Pit Explosions.” That seemed like a good idea. It begins:

Manure pit-related explosions or flash fires have occurred recently in both Minnesota and Iowa livestock buildings. Luckily, the explosions, to date, have mainly resulted in building damage, with few animal losses and no personal injuries or fatalities reported.

Luckily indeed! Actually I think it’s a testament to the ingenuity of the American farmer that this doesn’t happen more often. Most pigs in this country live suspended above a fermenting pool of excrement (often 9 feet deep), which produces gas. And often pig barns are heated by burners near the ceiling, with pilot lights. I found one report of these exploding barns written up in Rochester, Minn., Post-Bulletin:

According to police officials, the owner of the hog farm, Scott Mashing, was stirring the manure pit and standing near his tractor when the explosion occurred … The blast was so intense that it catapulted the man 40 feet into the air, across the yard, and into a gravel road. Mashing sustained burns and some singed hair. No pigs were apparently hurt in the explosion. It is unknown if Mashing was transported to an area hospital for treatment of his burns. The building sustained nearly $500,000 worth of damage.

Nutrient Management offers farmers farmers a few suggestions for not getting catapulted 40 feet and sustaining $500,000 in damages. First, they recommend ventilating intensively, and turning off heaters, pilot lights or anything that might provide a spark whenever you are stirring your slurry. If the pits are full it’s important to pump until the sludge has receded a bit before you start to stir and mix it up  – you need about two feet of head room between the floor and the pool of manure to allow pit fans to move methane and other dangerous gases outside. Finally, they say to watch out for foaming:

Foaming of manure pits is a growing and significant concern that may be related to the explosion incidents. Some of the recent cases have reported “foaming” or extensive bubbling on the manure surface prior to the explosions. Some reports noted that several feet of foam can develop in a matter of days. Some manure pits will foam while others do not.

Experts are working on food additives and such to control foaming. But at least explosions are highly visible and, it seems, not that deadly. There are some terrible stories about farmers going down into their pits to fix a broken agitator and keeling over when they inhale the poison gases. Then the dad goes in to save his son and also collapses and then the second son goes in… There are a couple cases like that where four or five people are killed. Industrial hog farmers are much more likely to have impaired lung function, they are on the front lines of zoonotic diseases. It’s hard, dirty work. Most farmers I’ve talked to said they’d gladly adopt cleaner, safer forms of farming if consumers would pay for it. But that doesn’t seem likely. Countries that have passed laws requiring more humane farms (like Sweden) end up simply importing most of their pork from other countries with fewer regulations. So the least you can do when you bite into your holiday ham is think of the intrepid farmers who brought it to you.