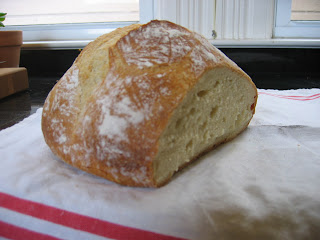 Here’s what you do if you want to make bread like this, bread with just enough spring against your teeth as you bite into it, just enough tension before it tears. Bread that is soft and elastic, which upon leaving the oven smells the way I imagine heaven should smell, if heaven were a small farm-house early on a December morning when you have awoken to find the kitchen already warm and the first snowfall of the season smoothing the earth’s hard angles into curves. Here’s what you do: You meet Laizu outside the bakery a little before 3:30 am. I was there before her, having hauled myself out of bed after a few hours of sleep and walking up through the sleeping houses. She pulled up moments later and shook her head at me as she got out of the car. “You really are interested in baking,” she said. “you’re early.”

We went inside. The little bakery was warm from the two massive ovens, one on top of the other. Laizu opened up a plastic binder and showed me the recipes:
White bread:
Starter
4 cups water
4 pounds 7 oz. flour
4 tablespoons of salt

“There are somethings that are not written down, that are just for the baker to know,” she said. For instance – those 4 cups of water? They must be cold. We poured the starter, which had been sitting overnight into a bowl and Laizu clucked with satisfaction when she saw the web of filaments that formed and stretched as she pushed out the last bits with a spatula. Then the dry ingredients (only kosher salt – finer salt overwhelms the taste). Then the hook-like arm goes on the industrial mixer and it kneads the dough slowly for 15 minutes (then fast for 5). “So what do I do if I don’t have a mixer,” I asked. Laizu threw up her hands. “Oh then you must knead it by hand. That I don’t know how to do.” I should mention that Laizu is a reluctant baker. “I never liked it,” she says. “I refused to learn. I didn’t want to get up so early.” The woman who had owned the bakery, had passed away she said, and this woman always told Laizu she should pay attention and learn. “She always said, ‘you should learn now, or you will regret it when I’m gone,” Laizu said. And she was right. But to my eyes Laizu is still a goddess in the bakery, a creator of miracles. As we talked she was slipping scones into the oven, rolling out a quiche crust, turning leftover bread into a rich pudding with eggs, cream and raspberries…
Meanwhile the mass of flour and water in the mixer has turned into a cohesive whole, clinging to the arm as if trying to climb out of its bowl. She stopped it and set the timer for 45 minutes of rising time. We made another starter, to begin fermenting for the next day. For this, Laizu explained, the water must be exactly 100 degrees. “I don’t feel right unless I use this thermometer,” she said, waving a yellow digital affair.
Starter recipes:
White
4 cups water
2 teaspoons yeast (active dry)
1 pound 4 oz. flour

The ingredients go in in that order, and when I measured the yeast into the flour by mistake Laizu considered it for only a few seconds before announcing, “Well, we just have to throw it out.” Then–perhaps reminded that I am in an altered state–she makes coffee (perhaps the caffeine has catapulted me into the present tense) and tells me I have to help myself. “You’re not a customer this morning.” Then she takes the perfect scones from the oven and insists I try. “They are totally different when they are hot.” Taught berrries burst between my teeth.
She dabs a hand in flour and lifts the mixing bowl, scrapping the dough onto the counter. “You see this?” she points at the web of glutenous threads that form as the dough pulls away from the bowl. “That’s how you know it’s ready.” She cuts the dough and I weigh it: 1 pound 12 ounces is what we are shooting for. She’s right almost every time.
“Now,” she says. “Watch very closely.” She spreads out the dough then folds in one edge to the middle, deftly turns and folds again, turn, fold, turn until it was a springy little ball, unwilling to fold anymore. Laizu gathers up a bit from each side and gathers it to the top, as you would to turn a square of fabric into a satchel. She lifts this package, wraps one hand around the neck to hold it in place,  dunks it-upside down-in a mound of flour, then closes the edges over the flour-dusted bit and twists it closed. When I try the loaf disintegrates to glue in my hands. Each loaf sits in its own floured basket next to the oven for 20 minutes.
Laizu keeps moving though, feeding croissants into the oven (she made them the night before), making various flavors of muffins, which she dislikes preparing (“I hate making these, everyone asks me why – I don’t know I just do.” I think I know though: The muffins are easy. When I ask her what she liked to make she replied “croissants.” She does it by hand, without a sheeter, a challenge if there ever was one.) She is thinking of leaving, she says. She’ll go to Europe then visit her family in Florida, where it is so hot – especially because the women in her family all wear burkas (though she doesn’t even wear a headscarf here in San Francisco). She stops and tells me to check the loaves. They must feel like skin, like the dry skin from the back of your grandmother’s hand, she says. Also, if you poke the side and it doesn’t completely rebound – it’s ready. Then, don’t wait, put it in the oven! She opens the  400 degree oven on top. She takes the basket and gently pours the loaf onto a pizza peel, then slides it in and shakes it until the loaf slips off onto the hot stone. When all the loafs are lined up she produced a bucket of ice. “This must be very quick,” she says, and takes a great scoop of ice and flings it, skittering down one side of the oven. Then another, down the other side. Then she slams the oven closed as it popped and sizzled and steam frothed out from the cracks.
Twenty minutes later she pulled out the golden loaves, and selected one whose internal tension had caused it to split the most on top, revealing a lacework of glutenous strands. “Take this home to your lovely wife,” she said. “And melt a little butter on a slice for her.”

2 thoughts on “The adventures of yeastman: Part 2”