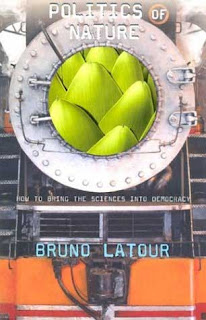 Update: Coincidentally there’s an article in this Sunday’s NYT Magazine on these issues. Latour is quoted about how his formulation against facts has emboldened attacks on climate change evidence.

I have had this on my shelf for a long time. Every once and a while I take it down and work my way through a little more. Philosophy is always hard, and French philosophers in translation have scared me ever since some traumatic experiences alone in my college dorm room with no one to protect me from Jean Baudrillard. With Latour, unlike Baudrillard, I didn’t get the sense that he was being deliberately difficult. But he still makes up an awful lot of words (or gives them special meaning which are different from their commonly understood meaning). Anyway – I’ve slogged through this enough that I think I can summarize in plain English. Though I’m sure I’m losing some of the nuance in translation. So here’s what (I think) Latour is saying in Politics of Nature:

Latour  uses Plato’s metaphor of the cave to describe the current state of the way we think about nature: We are the prisoners endlessly debating the projections on the wall, but certain people (those who claim to have science on their side) are assumed to have gone out of the cave and seen the real world (nature), and so they are given the power to cut off the argument and say, this is the way things actually are. So nature in this formulation, or natural law, achieves a sort of transcendent divinity. We worship it. If the laws of nature say we should sacrifice our son Isaac, well, we’d better do it because nature’s dice are loaded (as Emerson put it).

But he says, there is no cave – and no “out there.” There is, in other words, no such thing as nature. Which means that nature can’t (or shouldn’t) be brought in to trump the debate.

Latour’s not a relativist – he thinks there is an objective reality, and that the sciences give us better and better pictures of that reality. However – The sciences will never give a perfect picture.  We will probably never be able to predict the future. It’s easy for hubris to grow—but in point of fact the sciences still only give a little direction in the majority of decisions we make. The looming problem of our times is that people try to cut off political debate by declaring that their perspective is simply uncontestable reality, proven by science (even if “proven by science” is something a good scientist would never say). Science can help people make decisions, but because it’s always incomplete, and always made in the real world by real people (with their own assumptions, and desires, and incentives) it’s not really providing access to natural laws that transcend politics. This means that if I accept Latour, I can never pound your fist on the table and say: “We don’t need to discuss this – climate change (eg) is a fact and it’s a fact that we must raise the gas tax or we are all going to suffer. That’s not a political issue – we’ve sent our best scientists out into nature and we know that it it true. So no matter what you’re political orientation you are now bound by a higher law – the transcendent law of nature – to vote with me.”

The solution – First of all, come out of the cave: Recognize that we all have access to (and are part of) nature, and that people claiming that you should trust them without a careful consideration of all arguments are cult leaders (not scientists).

We need: Fewer appeals to science as a justification for a position, and more authentic science. Fewer indisputable facts, more collective experimentation.

So how do you make society work if it’s not guided by nature’s law? (It’s no more difficult than making a society work even if it’s not guided by religion). Scientists are certainly involved, as are moralists and politicians and economists. The first step is to recognize when there is some new issue troubling the water: It might be the discovery of a new disease, or it could be a group who say there is terrible timber management around their homes (maybe they think the clear cutting with seed trees is not working). The next step is to figure out everything that might be affected by this. Let’s stay with the second example – that might be the people that live in the area, the logging companies, the people who use the timber (home builders, craftsmen), those who consume the timbers, all the species that occupy the forest, or who might if a different strategy of management were adopted, the people downstream in the watershed, the species in those streams, the people whose weather patterns are changed by moisture evaporation from the trees, the people who breath the oxygen they create… and there are probably others. From all these parties we see what they can tell us about what they want. Some of this may be incomplete (we might not know what the fish wants, or to even include a fungus that no one has named yet). But we assemble as much information as possible (each party defining the problem in their own terms). Then we’d create a hierarchy—we’d figure out which party’s needs were the most important to our republic (maybe we don’t care so much about the bacteria that would like the entire forest to be coated in tar-like ooze)—we figure out what parties can live together and what compromises can be made. This would be a knockdown fight, but that’s the nature of politics—we eventually decide that it’s okay for some to die (Latour likes the example of 8,000 people dying from traffic accidents per year in France. Being able to travel quickly ranks higher in the hierarchy than those lives.) Finally, once you have that hierarchy you institutionalize it: You act on it. The next day, parties that are not content with their position on the totem pole come back again and make the case that their problem is hurting the republic – and if there is a big enough disturbance the process starts over. Instead of the laws of nature cutting off debate and creating simple solutions, there is tons of debate and the solutions get increasingly complicated.