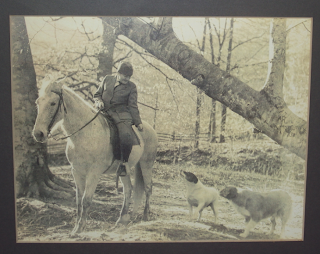 Last summer I made a trip to Kentucky to see what I could learn about an all-but-forgotten part of our medical history. The land on either side of the road grew steeper and greener, and by the time I reached Hyden, Kentucky, I felt I was at the bottom of a well with walls of beech wood and kudzu. This was true Appalachia, where dwellings clung to the rare plot of level ground, a doublewide up on a hillside ledge, a Dairy Queen in the bend of a river, a crook between hills provided enough resting place for the town of Hyden a handful of brick buildings clustered around a crossroads. The house I was looking for was tucked back in the forest, a manorial building of black logs and white chinking that stood above the Middle Fork of the Kentucky River. Hollyhocks were blooming in the yard. It was Mary Breckinridge’s house, and home of the Frontier Nursing Service.

When Breckinridge came here in 1923, the U.S. maternal mortality rate was 870 per 100,000. And in these deep hollows, where people were cut off from medical treatment, women were even more likely to die in childbirth. Breckinridge changed that. In under a decade it would be safer to give birth in her corner of eastern Kentucky than in the best hospitals in New York. It was as pure an experiment as you could ask for—there were no rich women flying in to deliver, no hospitals to catch the most dangerous cases—just a group of midwives making improvements. What’s more, the data were sterling: Breckinridge, a woman of great chutzpah, knew the world would doubt statistics generated by midwives in the mountains, so she recruited Dr. Louis Israel Dublin, vice president and statistician at the Metropolitan Life Insurance Company (now MetLife), to do the numbers.

The results, published in 1932, were astounding. The women the Frontier Nurses serves, who were desperately poor and usually gave birth at home, were ten times less likely to die in childbirth than the average American. The nation would not reach the standard of care in this corner of Appalachia until the 1950s, after the widespread acceptance of antiseptic and the discovery of antibiotics.

Breckenridge did not quite know what to make of these numbers. “The question that will arise in every thoughtful mind is why there should be this discrepancy between the Kentucky mountain woman and her city sister,” she wrote. “Doubtless there is too much deliberate obstetrical interference in city hospitals but not so much, I am convinced, as people might think.” Then, in what seems like an uncharacteristic lapse of reasoning, she went on to lay out a theory that drew on eugenics: Rather than praising her own work, she credited the racial homogeneity and sturdy birth canals of the population she served. These explanations are no longer scientifically relevant, but even if the racial hypothesis had held up, it did not explain the radical improvement that had occurred among this population.

A better explanation had to do with the fact that the Frontier Nursing Service midwives were highly trained and able to devote time and passion to their charges, making dozens of house calls per pregnancy. Most importantly, they weren’t tempted to use those technological interventions into birth that Breckenridge had mentioned, which often did more harm than good.

This low-tech armamentarium of time and attention was highly effective. When Louis Isreal Dublin made his accounting in 1931, eastern Kentucky was suffering from a year-long drought and famine, and tuberculosis was running rampant. And yet maternal health was improving. Dublin concluded that, if this style of maternity care were became a model for the nation it would save a million lives within fifteen years:

“If such a service were available to the women of the country generally, there would be a saving of 10,000 mothers’ lives a year in the United States, there would be 30,000 less [sic] stillbirths and 30,000 more children alive at the end of the first month of life,” Dublin wrote.

Today, the Frontier Nursing Service now runs a school, which sends some 200 nurse midwives to work in underserved areas around the country. The midwives work at the margins, where more technological care is unavailable. Dublin’s vision had never come to fruition. Rather than remaking obstetric practice in its image, the place of midwifery in the medical hierarchy hadn’t changed much since 1925.

(This is a condensed excerpt from my book – I figured I’d post for midwives week.)