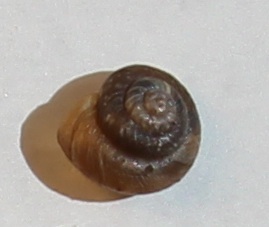 This little shell (I assume a snail shell?) is really quite remarkable for two reasons. The first is that I found it in my desk-side fern (Fernando). I’ve had Fernando long enough that the surface of the dirt is covered with a layer of moss, so it’s unlikely this shell came in with the dirt and I only just noticed it. Since it was on top of that surface layer it makes me think that I had a little snail crawling around. Where did he come from? Are there others? What does he eat, and who eats him? I started imagining the trophic food webs contained in this little pot–an ecosystem at my elbow. Rob Dunn and the other people at Your Wild Life have begun studying the creatures that live with us. Naturalists know a little about how bighorn sheep, and mountain lions, and say sagebrush interact, but we know surprisingly little about the life that thrives in our homes. We know so little in fact that when Dunn sent an undergrad to look closely at the species in New York City she discovered a new species of ant within three days. Here’s the other remarkable thing about this shell: 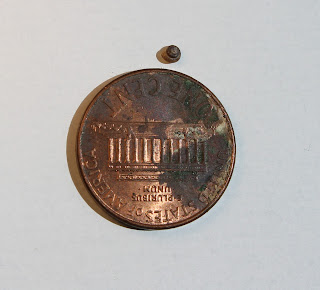 This is the same picture, I just zoomed out a bit. You’ll notice the penny is still double or triple life size. This thing is tiny. I thought at first it was a speck of dirt, then I looked closer and noticed something symmetrical or ordered about it. And it was only when I put it on a white sheet of paper (carefully – it’s too small to pick up with a thumb and forefinger) that it revealed itself to me. What else have I been missing because I’ve been to busy to stop and examine the dust?

If anyone can identify this snail, or tell me anything about it I’d be hugely appreciative.

One thought on “Wildlife in the houseplants”