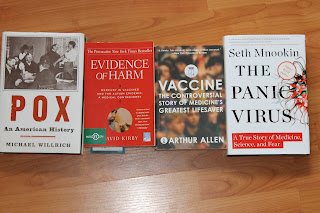 This is a follow up post to this one, about the books I’ve especially enjoyed in my research. There were four books I wanted to include about vaccines, but it’s such a touchy subject that I found myself writing long on this section, and so I’ve broken it out as it’s own post. It contains, just fyi, a bit of a spoiler for the fourth chapter of my book.
In researching the evidence about vaccines I started with David Kirby’s Evidence of Harm. I should admit that going into this I was pretty sure that there was at least some kernel of truth in the suspicion of vaccines, and that the mainstream scientists were overlooking something. I wanted to start with this minority opinion in the hopes that it would contain some solid, overlooked, facts, or at least a legitimate hypothesis that I could flesh out by talking to scientists. It’s a riveting and well-reported book and, to his credit, Kirby acknowledges facts that don’t fit with the hypothesis that vaccines cause autism. But my sympathy was gradually eroded by the book’s imbalance in attention: While the skeptical parents are described in intimate detail, the scientists are rarely quoted and appear uniformly shady, and conspiratorial. And while Kirby gives space for inconvenient facts, he goes to great lengths to explain them away. These explanations started to feel shakier and shakier to me. Take this, for instance: Data crunchers among the vaccine activists had “predicted that if thimerosal [vaccine mercury] were a cause of the epidemic, then the new cases of autism should begin to drop sometime around 2004,” Kirby wrote, “or four years after mercury removal began—which is precisely what happened, with steeper declines to follow.” But I after that slight dip in 2004, the upward trend in autism cases has continued. It’s a bad sign when your own arguments undermine your credibility. And when I really dug into the scientific literature, I couldn’t substantiate a single argument in favor of avoiding vaccines. As I learned more and more about vaccines I started thinking of them as “natural” rather than frighteningly unknown technology. (I know that doesn’t sound convincing here in this abbreviated format, I explain it more thoroughly in the book).
I found Arthur Allen’s Vaccine (which tells the good, the bad, and ugly of the vaccine story from Jenner and the Puritans up to the beginnings of the mercury scare) and Seth Mnookin’s The Panic Virus (which picks up where Allen leaves off and focuses on the controversy), much more reliable. Allen comes across as a disciplined historian, who never looses his cool, while you can feel Mnookin’s rising blood pressure pulsing through the pages (which gives the writing some forward momentum). The Panic Virus, I think, it most useful for its detailed accounting of what happened during the scandal: Who claimed what when, and how those claims squared with the facts.
Mnookin spends a lot of time talking about cognitive biases to explain vaccine skepticism, but I never got the sense that he (or Allen for that matter), really understood people like me; that is to say, people who are not denialists, but just grew up in a community skeptical in general of big government, big medicine, and inerrant technological progress. Michael Willrich, however, does seem to understand what it’s like to be a part of a rural community that is suspicious of attempts by the ruling powers to control its behavior. Perhaps it’s the distance of time that allows him to see this dynamic so clearly, because his book Pox is entirely about the conflict over vaccination at the turn of the 20th century. For that reason, the book about something that happened over 100 years ago is singularly relevant today: If there’s any hope of convincing people (as I was eventually convinced) that vaccines are good, it’s not enough to simply tell people they are wrong, we’ve got to earn their trust. And in order to earn someone’s trust you’ve got to understand them.