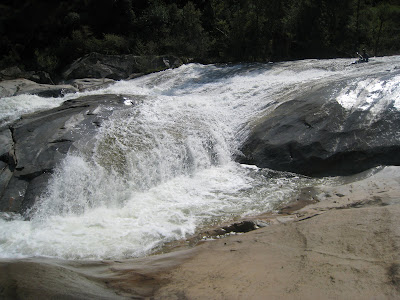 If you carefully squint at the top right corner of this picture you’ll see me running the upper North Fork of the Kaweah. I love kayaking. But as a kid I popped my right shoulder out doing it – a lot (I had some bad habits – plus I’ve always had loose shoulders). By the time I was in college my shoulder would slip out if I so much as made an expressive gesture (“Just go that way, over th-aargahhaaaaaa!”). So I got surgery. The doctor told me he “tightened everything up” and “cleaned it out” and he gave me the video to prove that he hadn’t just been messing with me while I was under. So I gobble Vicodin, wear the sling for a few months, and am not allowed to kayak for a full year. That was spring of 2000. And all was well until spring of 2009.
We were up in Downieville to run Pauly Creek (I don’t have pictures but there are great ones here). It’s a short run with lots of waterfalls and I was feeling great. I ran the big (20 foot or so) drop at the bottom which I’d never done before (because my friend Eric nearly died there and his stories spooked me). It was still early in the day so we drove back up to the top and I convinced a small contingent to hike a couple miles upstream to get a little more for our money. None of us had ever seen it before, and the light was starting to turn amber with evening as I led the crew down the first drop. Things went well until about the fifth rapid. I had lined up to charge from right to left, break through a hole, and end up in an eddy on the far side of the creek. But just as I reached for my first paddle stroke a hidden rock caught the downstream edge of my boat and stopped it dead. The rest of my body rotated around that pivot point like a cracking whip. As I went under, the paddle blade caught the water. You are supposed to have a loose hand – so that you release the paddle shaft in these situations were the opposing forces are getting big. I had a death grip. (more after the jump)

When your shoulder dislocates there’s a sickening grinding slipperiness as tendons give and the humerus slides off the scapula and into the viscera. I knew immediately what had happened, but was in denial as I tried to roll up. Things were not working right – it was definitely out. All this had taken place in a little under three seconds, and though underwater, I knew I was still above the drop. I shrugged back violently and felt the humerus slide back into place, then rolled up just in time to hit the hole and go back under. I reached for the surface again – the swift water on the downstream side caught my blade and the shoulder was out again. I shrugged it back in and tucked my body up close to the boat. At this point I was rattled. I was upside down – my head acting as a keel – moving fast down a creek I had never seen before. I knew I had to get to the dry side before I floated into something dangerous, but I was also in shock – I wanted to keep my arms in tight – not expose my shoulders by rolling. I steeled myself and rolled on my left side. My paddle found a rock and I vaulted inelegantly up.
I looked around. I was in a granite slot. Above the rocks the forest rose in steep banks. Trying to scramble up that with a boat and one bad arm would have been nearly impossible. I signaled to my buddies that I was okay by pounding on my helmet. If I could just pick my way down the next mile and a half there was a trail where I could hike out.
That mile and a half was miserable. My shoulder came out several more times. Once, I clawed my way up a rock face to the surface, and found myself clinging just inches from the lip of a waterfall. By the time I finished, I was shaking with adrenalin.
The Ericksons – old friends – live not far from Downieville and that night I drove to their house. Bob and Liese gave me lots of TLC – ice, an omelet and toast (at 10 pm) and a soft bed. And naturally, the conversation turned to treatment. Would I get it fixed? Or let it heal on its own. My father in law is an orthopedic surgeon. He told me it will be completely better in about 20 years if I did nothing (and didn’t re-injure it). “But you are young, you like to do active things like kayak…”
That was just it though – I was only kayaking because I thought the surgery had turned me into a bionic superman with titanium screws. If I knew that my shoulder was a liability I probably wouldn’t have been there in the first place. And now that I’d lost some trust in the surgery…
There was also something else. As I made my year long recovery in 2000-2001 I began to wonder how I would have fared if I had just skipped the surgery and just spent 15 months doing intensive physical therapy. If I built up massive shoulders I wouldn’t have this problem. But of course I also absolutely believed that the surgery helped a lot.
Then again – that belief can be a confounding factor. The amount of faith you have in a treatment -it has been demonstrated again and again – has a huge effect on its success. Consider what Daniel Moerman has to say about heart surgery – first he talks about bypass surgery, then:

In angioplasty, a little balloon is threaded up to the coronary arteries and inflated. This expands the artery, allowing more blood flow to the heart. Given these theories of blocked “pipes” (that’s what heart surgeons call arteries), these procedures easily visualized when you look at a bit of rusted plumbing from the laundry tub, make very good sense.
But there’s more to it than that. These “pipes” are part of thinking, knowing people. Angina pectoris … is, it turns out, highly responsive to inert treatment as well.

In several experiments doctors did sham surgeries on angina patients – just cut them open and closed them back up. Stunningly, the patients of the sham surgeries showed more improvement than those with real surgeries. One sham surgery patient from Kansas City:

“Yes. Practically immediately I felt better. I felt I could take a deep breath … I figure I’m about 95% better. I was taking five nitros a day before surgery. In the five weeks following I have taken a total of twelve.” This patient’s arteries were not ligated. But he did have two scars on his chest, and he had an explanation that made sense.

Surgery has a very powerful placebo effect – or as Moerman prefers “meaning response.” We can visualize the rusty clogged pipes – and how a bypass will fix it. I can understand how my arm is sliding around – and how I really want to just “tighten it up” and “clean out” all the grit out of there. Our bodies respond to meaning – and surgery fits nicely with our conception of ourselves as complex machines. We really get that – so surgery really works. Now, none of this is to say that many forms of surgery don’t work without the aid of the patient’s mind. But it does give me pause. The idea of titanium screws and tight ligaments had me feeling pretty bomber (as we say when engaged in extreme sports). Maybe a little too bomber.

For now I’m going to take it easy, keep doing my thera-band and see how it shapes up. It’s been about six months and I hardly notice my shoulder anymore – pain is very infrequent. Range of motion is back. I don’t flinch anymore when someone approaches from the right side. I’ll add updates later. But what do you think. Should I get surgery – and take all the placebo I can get along with it?
I know one thing – I’m not doing anything even class IV unless I build up bigger shoulder than I’ve ever had before. Anyone know how to do that? I’m terrible at bulking up.

3 thoughts on “Surgery versus therapy”