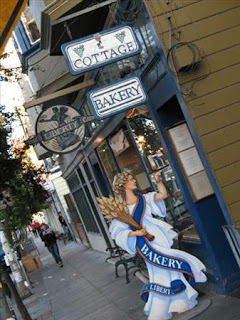 I’ve been meaning to write about my initiation into the select novitiate of the dark arts of bread-making, but I was particularly busy in the days leading up to the holidays and then particularly lazy during. Now that they are ending I feel a stirring of the communal sap—now that other people are girding up for a real working Monday, it is much easier to brush off the feeling that there might be some richer form of amusement out there for me to capture. Amazing how persuasive is that sense that other people are working – or playing – in convincing me that I should be doing the same.
All that is to say that this happened more than a month ago. It started when Beth and I went to the Liberty Café Bakery one morning for coffee and pastries. I love this bakery. It’s on top of the hill, in the “downtown” of our neighborhood, but tucked back behind the row of shops on the street so that you have to slip down a three-foot wide passageway between the buildings to find it. The bakery’s existence in this secret garden would not be enough, on its own to secure a permanent right of tenancy in one of the chambers of my heart—that guarantee was ensured by the cinnamon rolls. And then by the custard-like quiche whose essence is infinitely rich yet light – ephemeral on the tongue and on the plate.

It’s best not to arrive at the bakery with fixed hopes – some days the cinnamon rolls are gone by 10am. So when Beth and I arrived that morning we were eyeing the wares and calculating the potential return on an investment in savory or sweet. I was also eying the bread with some frustration. I’d been trying to make bread for months and had succeeded only in making dense little balls of baked play-dough. The Liberty Café bread, by contrast is fluffy and so delicious it’s hard to believe it’s merely flour, water and yeast. So when Laizu, the baker, squeezed through the line to drop off some fresh loaves I asked her if she made them.
“Why,” she asked alarmed, “was something wrong?”
“No, I love them, I want my bread to be more like them. Is there something special you do?”
She considered. “How long do you let it rise? That’s one thing – when it’s ready you need to put it in right away, don’t wait.”
“How can you tell?”
“When the top feels like skin.” She wrinkled her nose, “like old dry skin.”
I nodded half-heartedly.
“You could be using the wrong temperature water when you make the starter,” she mused. “What about ice, do you use ice in the oven?”
I shook my head. I didn’t even use a starter. This was way beyond anything I could find on the internet.
She shrugged. “It’s hard to say. If you really want to learn you should come see how it’s done. You can come watch if you like, I start at 3 am.”
That’s what I’d been angling for. “I’ll set my alarm,” I said.
whew – that’s all for tonight. I’ll have to get into the nitty gritty of the arcane art later.