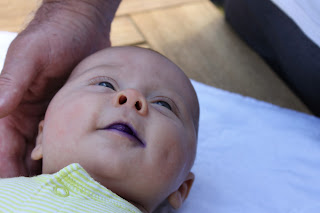 About three months ago my daughter was born, and aside from sometimes looking like ET, and sometimes like Paul Giamatti with a hangover, she was perfect in every respect. Then we noticed that she had some little white patches in her mouth, which I assumed were just fatty milk residue but then had to admit were thrush. Yeasty thrush infection in the perfect baby mouth! Imagine my outrage. It got worse and worse until finally we called the doctor who gave us the Rx for Nystatin, an antifungal. It was this awful, sticky yellow stuff that had a disorienting viscosity and would always drip right when the baby had turned her head. So it got everywhere, and we were supposed to give it every couple of hours, and I felt like I was ruining my daughters palate by making her first significant exposure to a new taste this horrible sugary stuff. Also, it totally didn’t work. We fed her the stuff for over a month, carefully spreading it all around. It seemed to fertilize the thrush.

So like any good, meddling, slightly neurotic parents we look in our infinite library of parenting books and read about another thrush remedy called Gentian violet. We ask the pediatrician about it. “There’s a blast from the past,” he says. “That’ll work.” The wife buys some (for $2!) at Walgreens. We stick it in the baby’s mouth. Baby now has a purple mouth. The next morning all those white patches are gone save one pin point on the lip. We hit her again with the purple magic. Done.
Then, of course I start getting up on my high horse about the superiority of herbs and blindness that makes us default to prescription drugs even if they don’t really work. Next I look up Gentian violet and learn that it’s not derived from the purple gentian tulip as I had thought but instead, from coal tar. It’s also known as Tris(4-(dimethylamino)phenyl)methylium chloride and in large quantities it’s linked to cancer. Oops.
So then we go back to the doctor and tell the story and he gets all worked up about it. The stuff has been used forever, he says, it’s perfectly safe, it’s got a track record better than aspirin. Everything causes cancer in high enough doses. The reason he’s upset is that research only gets done if there’s profit in it. And no one is going to pay for a clinical trial of chemical that sells for $2 a bottle (enough for about 300 thrush-mouthed babies). True.
So I’m pretty glad we are no longer buying Nystatin and the baby is once more perfect. But funny how my biases shifted on me when I went from thinking natural herb to chemical. Why should the herb be any safer?
By the way, if you are a parent stumbling on this after trolling the internet at 3 am you should also hear the following addendum. You’ve no doubt already read that gentian (or crystal violet) stains. I knocked the bottle over, off the top of the toilet and it went everywhere: Down the wall, in the toilet, all over the floor, on my feet… If you are as clumsy as me, break out the rubbing alcohol. That will lift it off non-porous surfaces amazingly well. Still, budget two hours and half a roll of toilet paper.

3 thoughts on “The problem with inexpensive remedies”